Contract or employment contract? As I mentioned, doctors are often tempted by widely understood medical institutions with financially advantageous contracts. Employment on the basis of a contract on the part of the doctor must involve opening a business, paying health and social insurance contributions (on his own) and taking care of tax matters (including income tax regulation).

In addition, the doctor should have a civil liability policy (OC) in connection with the profession performed under the contract. In the era of relatively cheap accounting services, this solution seems to be beneficial in economic terms.

Doctor’s civil liability – based on the contract

There is a typical element of the employee’s subordination to the employer. Of course, we are talking about the entity with whom the doctor has signed an employment contract, and not e.g. the superior doctor, head physician or another person from the team.

A doctor under an employment contract may exercise the rights provided for in the Labor Code, which may include, among others, paid annual leave, severance pay, awards. He also does not have to think about the issues of ZUS contributions or income tax advances, which the employer does on his behalf.

From the legal point of view and the specificity of practicing the medical profession, the differentiation of the grounds and scope of civil liability is, in my opinion, a key issue in answering the question – which form of employment is the more favorable?

In the case of a civil law contract (contract), the doctor is jointly and severally liable for the widely understood medical error with the health care institution (hospital) with which he concluded the contract. Patients are becoming more and more aware of the law, and claims for damages – among others. compensation and a pension are no longer a rarity. 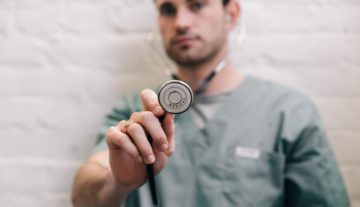 Specialized law firms are established to pursue claims related only to medical malpractice. Therefore, when choosing a contract by a doctor, it is extremely important that the doctor has an appropriate civil liability policy. This will constitute a security against claims, because although the doctor is jointly and severally liable with the hospital in this case, it is with all his property.

Doctor’s civil liability – based on an employment contract

It is common for patients’ claims to significantly exceed the protection provided by the insurer. In particular, if, as a result of a medical error, a legitimate pension claim arises in addition to redress.

The perspective of liability for malpractice for doctors employed under a contract of employment is much safer. In the doctrine and jurisprudence, hospitals are classified as enterprises moved by the forces of nature. The hospital, employing a doctor on the basis of an employment contract, and being its superior at the same time, will be responsible for the so-called medical errors that the doctor makes.

Of course, we are talking about the activities of a doctor performed as part of the duties entrusted to him. There must be no doubt that a doctor employed under a contract of employment must be at fault for a hospital to be responsible. For the emergence of civil liability on the part of the hospital, it is not required that the employing entity itself is at fault.